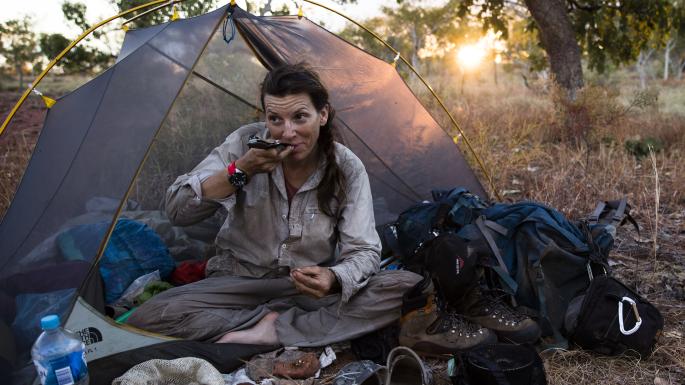 ‘I walked alone from Siberia to Australia. The bears were fine, but the men were a problem’

Sarah Marquis has crossed deserts, jungles and wilderness, outwitted crocodiles and survived with no food or water. She explains why she puts herself through it.

When Sarah Marquis gets really thirsty, in the middle of her epic cross-continental survivalist walks, she can resort to drinking snake’s blood. You know, trap a juicy snake, hack its head off, bury the venomous parts, gut it and milk the veins. Into your mouth, I ask, agog, and she looks shocked, as if I’m some kind of savage. “No, a little cup. All neat.”

I meet Marquis at The Times building. She was shaken by her journey. Not the 12,000 miles that she walked in three years from Siberia to Australia but her trip on the rush-hour Tube: “Seriously, how can you cope with that?”

I am also a little shaken by meeting her. I’ve read her book, Wild By Nature, about her unsupported solo hike from one end of the planet to the other. I’ve heard about her expertise living in deathly hostile terrain, emaciated, at the limit of human endurance, tricking crocodiles and violent sexual predators out of their prey. I am expecting Mad Max with boobs.

And there she is, looking like Jemima Goldsmith: careful make-up and highlighted hair. (She wanted to shave herself bald for the walk, but her hairdresser advised that having some hair was more practical. Despite the family of small animals that came to nest in her dreadlocks, she concluded “he was right”.)

Her business card states her job title as “explorer”, which I think is one of the coolest things I’ve seen. “It’s a perk,” she says offhandedly. This also marks her out from adventurers who are in it for the glory and the self-indulgent adrenaline buzz. Her feats make those guys of the Bear Grylls school look like kittens in pink bows, but she is low-key about it. She doesn’t want to put a flag anywhere. “It’s not the point.”

Her male fans online call her Artemis, goddess of the wilderness. Yet throughout her travels it is the human male who has given her the most grief. When adventuring she disguises herself for safety as a man, like a Shakespeare heroine. In the deserts and jungles, in the secrecy of her tent, she would always then slip into a pair of pink merino pyjamas to remind herself who she was, “for morale”.

She often receives emails from women saying that she has inspired them to start their own solo adventures, even if it is only to camp for one night. “It gives me goose bumps, it’s incredible.” The book is dedicated to “all the women in the world still fighting for their freedom”, yet she is no Feminist Gump. The goal of all her journeying is to dissolve her fussy civilised identity, and experience “melting into nature” as humans did and should. So I buy her a caffè latte and we begin.

First, has she heard the new term “suffer-fest”? This is the phenomenon of people willingly enduring multiple hardships — as in “island survival” TV shows or ultra-endurance races — which seems to work as an entertaining counterpoint for the rest of us, increasingly confined to our sofas.

“No. The pain is not my motivation, the pain just comes with it. It takes me six months of pain, waking up every morning and every inch of my body is hurting.” This was when she was dragging her water and little else across a pathless terrain that our species may never have touched.

The pain is not my motivation, the pain just comes with it

“Then one morning — I can picture where I was in the middle of the Gobi Desert — I opened my tent. I was the wind, I was the sand, I lost my identity as a human, flesh-wise. Past that point, you don’t distinguish yourself from nature. It’s your friend. We don’t understand nature any more but it is where we belong.”

She knows this from a lifetime of undertaking long solo expeditions. The first six months she calls the washing-machine stage: her brain churns, full of anxieties from the modern world. “I hear the voices of my friends and family for a long time.” It finally rinses clean.

“I’m the girl next door, I’m not special. We all have the strength inside, but you have to be willing to take the step.” I don’t, I tell her. I get nervous about weird noises when I sleep in the house alone. “You don’t know. People get good at what they do, but then they don’t learn any more. My step is not your first step. Just take it.”

Marquis, 43, grew up in rural Switzerland. Her parents were middle-class. Her two brothers “turned out normal”, she says. “I’m the weird one in the middle.” By age six she had saved enough pocket money to buy the National Geographic: “Normal kids would have gone for sweets.” She has since been chosen as the magazine’s adventurer of the year. By the age of seven she had run away with her dog to spend the night in a cave. “My sweet mum had called the police,” Marquis says ruefully, “but she knew I was a wild spirit. After that she supported me.”

When I think about her mother I am in a turmoil of pity and admiration. At the age of 16 Marquis got a job working on the railways that cross Europe, and was repeatedly groped by older male staff — useful experience, as it turns out: “It toughened me up.” At the age of 17, she told her mother: “Mum, I’m going to Turkey, on my own on a horse” Her mother politely inquired if she intended to learn to ride first. “No. I went there, bought a horse, the horse galloped for 3km, I learnt how to ride a horse. She knows me.”

Turkey was too easy for her, eating apricots off trees and using her saddle as a pillow. She longed to go wilder and live by her wits, like an animal. A pattern was established: she would work for half the year at home to fund increasingly ambitious solo expeditions in Australia and South America. She was naive, had disasters aplenty and lost a lot of weight.

I mention a couple of famous “walking women” to her, but she sees that I don’t understand her mission at all. Ffyona Campbell, I say, the British woman who walked around the world? Marquis says she has walked for 23 years and covered more than 44,000km but, unlike Campbell, “I don’t go on the roads”. What about Cheryl Strayed, I say, who wrote a bestselling book called Wild based on her incredible feat of — and I falter a bit now — walking for three months on the popular Pacific Crest Trail down the west coast of America. There was even a film, with Reese Witherspoon. “Oh, I walked the Pacific Crest Trail in 2000. Everyone wants me to write a book about it. I say no — it’s a trail.”

Marquis has stories to tell about the Pacific Crest Trail: she became trapped in a wildfire, escaped drug dealers in the desert, was arrested by American special forces for straying into a restricted zone (“the snow covered the signs”) and had to run 75km through the night to help another hiker who was dying of hypothermia. However, the path and the people got in the way of communion. “When I walk, I make my own way out there. I don’t follow a ready-made path: there isn’t one. It involves a lot of study of topographic maps, to know where the water will be. It’s years of preparation.”

When I suggest that her next challenge could be the North or South Pole — honeypots for suffer-fest addicts — she shakes her head. “There are too many people there. You need a lot of support teams, structure. I like freedom.” The only time she walked with someone else was when she crossed Patagonia with a boyfriend. He misread the map, “but he had such a big ego he wouldn’t admit it”. Never again.

On this last trip she could walk for weeks without seeing anyone. When she fell sick in the Laos jungle with dengue fever, she quickly tied her leg to a tree so that in her delirium she wouldn’t drown herself in the nearby river. She doesn’t sentimentalise her interactions with remote people. She was held hostage by a group of 15 men with automatic weapons. She once took shelter in a Mongolian tribe’s yurt; a large toad crawled over one side of her face while a man with an erection tried to enter her sleeping bag on the other side. She hit the bloke — “I chose the toad.”

What is she more afraid of, animals or humans? “In this expedition only people were a problem. Especially in Mongolia. They were drunk all the time — you can’t do anything with drunk guys. Animals you can read — when you’re in a wolf’s territory, you know what to do. Humans are harder to read. Vicious animals.”

What does she think she will die of? “I don’t care. I am ready. I only care about dying with regrets.”

Did she trade children for her adventures? She tells me the parable of a termites’ nest, which she has often observed. Male or female termites can be warriors or workers, protecting the breeders. “We think females are supposed to breed but in nature there is diversity. There is no good or bad, only that mission in your heart.”

Let me guess, I say, you are a warrior? She laughs. And laughs again when I mention a mysterious line in her book, that throughout all her wanderings she did find “hairy, bare chests where I rested my head for an instant”, brief love affairs that restored her faith in mankind before she moved on. “People think I am a nun. I say no, I’m a woman. I can be really girlie one moment and I can be as tough as a cookie.”

Does she, in her sexless walking clothes, map dangling down the front to disguise her breasts, ever wish she were a man? “Sometimes. I say, ‘I wish I was a guy called Roger. Big, tough Roger.’ But no, I think I have more skills than a man.”

I still find her hard to understand. If she loves the wild so much, why doesn’t she just stay there? On a previous trip, when she walked nearly 9,000 miles around Australia in 17 months, she says she was tempted. “But I was so happy. I thought: ‘I must tell people about it.’ That was my first book.” It wasn’t just that she wanted a hot bath? “That too. I like that too.”

Before she leaves she shows me a picture of herself in the midst of her walk, hair matted, face gaunt, eyes wild. “Wow,” I say, “you look so . . .” and before I can say “terrible”, she jumps in: “Cute, right?” She wants to see herself out, but I warn her that the lift system is very complicated.

Wild by Nature: From Siberia to Australia, Three Years Alone in the Wilderness on Foot by Sarah Marquis is published by Allen & Unwin, £12.99