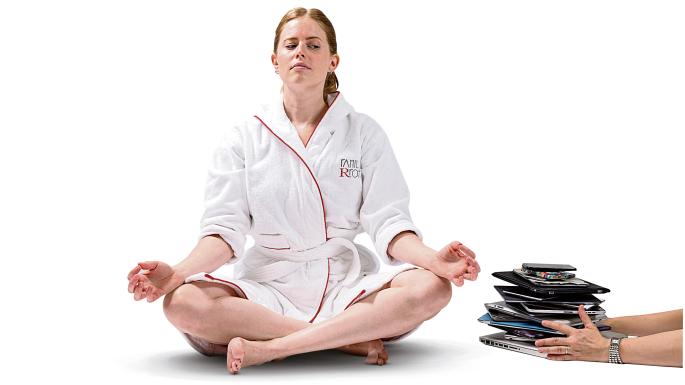 Go off the grid on a digital detox

What are you reading this article on right now? On a tablet, I’ll bet. I expect you’re watching television at the same time, or stopping to answer text or email alerts every few paragraphs.

If you are, you’re not alone. According to research by Ofcom, we spend, on average, three hours a day connected to the web — consuming news, speaking to friends and judging our peers on social media. Constant connectivity is addictive, so it’s more difficult than ever to switch off. In fact, to really get away from it all, you need an excuse, a credible reason to ditch the devices. What you need is a digital-detox break.

I’m as guilty as the next girl. One Wednesday last month, I kept track of my digital usage and found I checked my phone 53 times, the first within five minutes of waking. (Shout-out to the 61% of people who do the same.) But as soon as I arrived at Rockliffe Hall, a 19th-century manor house turned five-star spa and golf resort just outside Darlington, they took my phone off me and locked it away. “I don’t know how you’ll do without it,” the receptionist said. “I’d be wanting to check Facebook straightaway.”

The staff at Rockliffe have noticed more and more people around the hotel stuck to their phones — even in the spa. “People would be texting under the table while I was working on their back, or getting up to check messages mid-massage,” says Claire, a yoga instructor and massage therapist. “So we’re trying to help people to stop, have some fun, relax and get the headspace to have a moment of mindfulness.”

The break is not just about taking away all your screens. It aims to slow things down with time in the spa, and uses yoga, meditation and mindfulness to help you acknowledge what you don’t see, hear or appreciate while tweeting or checking BuzzFeed. I was giddy with the anticipation of freedom from work emails, cat videos and my hockey team’s sweaty selfies, but what would happen if someone needed to get hold of me and couldn’t?

The spa soon made me forget all that. I was pummelled by water jets, sweated it out in the two saunas and the steam room, braved the icy igloo room and fell asleep on a heated mosaic bed. I was ushered in for a session in the Spa Garden, a plush VIP mini spa with a heated outdoor infinity plunge pool, where I lounged in the bubbles as the setting sun tipped orange light across the fields. Then, in a treatment room, I was scrubbed down, washed off and oiled before having my scalp massaged. I thought of my phone just once — when I wanted to take pictures of that sunset.

At dinner, I missed being able to Instagram my roast duck with cherries, and having a screen to hide behind. I’ve become used to using my phone as social cover in awkward situations (in the lift at work is a classic), and you don’t half feel exposed without it. I quickly realised nobody was watching, so I started watching them instead: the couple next to me, engrossed in their phones and ignoring one another. I drank more red wine, ratcheting up my relaxation levels from laid-back to near-horizontal.

Back in my room, they’d taken away the television remotes, so there was nothing between me and a sleep uninterrupted by melatonin-suppressing blue light. It was one of the best I’d had for ages.

It still hurt to get up for the sunrise meditation, mindfulness and yoga. This is the serious bit of the break, where you consider the lessons of digital deprivation. Claire asked how technology adversely affected my life and we discussed easy ways to reduce my screen time. By now, I was so relaxed, so disconnected, I felt as if I could do anything. I inwardly pledged never to use my phone again, to only read books by candlelight and to communicate exclusively by owl post.

“Keep it simple,” Claire advised. “Resist the compulsion to check your phone, and maybe try to start the day by just feeling thankful for your life.” I couldn’t do that last bit — far too happy-clappy — but I did resolve to stop looking at my phone in bed, which so far I’ve stuck to, and I’ve slept better for it.

After a lazy eggs benedict, the 24 hours offline were over. I’d missed my camera, but nothing else. In fact, this break had taught me that (surprise, surprise) I can do without. It’s not hard. I can, and should, leave my phone in another room/my bag/a drawer when I don’t need it, and nothing will happen except a break from stout political opinions on Facebook, people’s babies on Instagram, work emails, memes, tweets and WhatsApp, which will make my step a little lighter.

I turned my phone on when I got back to London. There was a voicemail from my editor — left two hours into the break. For once, I had the perfect excuse for ignoring him.

Rockliffe Hall, where an overnight detox break costs £95pp, B&B, including a yoga and meditation class, and a two-hour Garden Spa session; prideofbritainhotels.com

British boltholes where you can escape the digital world

Isle of Eriska, Oban
How about a private island to get away from it all? It’s not a sandy speck in the Indian Ocean, but the Isle of Eriska, off the west coast of Scotland. The hotel here has 300 acres of windswept grounds, a golf course and a Michelin-starred restaurant. On its new digital-detox package, you give up your devices at the door, then get busy with a seaweed-based spa treatment, hikes around the island, reading in the library and even sailing excursions. It’s only a detox in the digital sense, so have some wine — preferably by the fire after your gourmet dinner, which is included on both nights.
From £410pp for two nights, half-board, with a spa treatment; eriska-hotel.co.uk

The Old Schoolhouse Inner, Hebrides
Forget wi-fi and phone signals — this retreat on another private Scottish island, Eilean Shona, doesn’t even have electricity. The Old Schoolhouse, which has been refurbished by the hotelier Vanessa Branson (sister of Richard), is a character-building 45-minute walk from the private jetty. Spend your days taking bracing swims, making campfires on the white-sand beach and going on coastal walks. Then it’s back to your plush digs to light the woodburning stove and gas lamps, take a soak in the double-ended Victorian rolltop bath and crack into those board games. This is definitely a place where you make your own entertainment.
Sleeps 4; a week costs £1,250, self-catering, including transfers to and from the mainland; eileanshona.com

Rowan Yurt, West Yorkshire
Part of Sykes Cottages’ Jomo Collection (“joy of missing out”, since you ask), this yurt in Hepworth, on the edge of the West Yorkshire Pennines, is the perfect refuge when you feel the need to shut out the world. It has a private hot tub, a woodburning stove, a kingsize bed and access to a pool and sauna in the grounds. What it doesn’t have is wi-fi, a phone or TV. There are scenic walking routes from the front door and, should you feel the need for some civilisation, it’s a five-minute walk to the pub.
Sleeps 2; three nights, self-catering, from £500; sykescottages.co.uk

Pantlleni, Snowdonia
Turn off your phone, put away your tablet and kill the lights: you don’t want anything to pollute the stargazing at this stone cottage in Snowdonia’s Dark Sky Reserve. There’s no wi-fi or phone signal, anyway (or TV), so you’ve time to spend staring at those stars while the Aga keeps you cosy. During daylight hours, get outdoors, find a footpath and go down to Lake Gwynant for canoeing and swimming.
Sleeps 4; three nights, self-catering, from £336; menaiholidays.co.uk

Cruckbarn, Herefordshire
Fleeces on, guitar ready: singing round the campfire at this isolated hilltop barn conversion, tucked away in woodland, is just one way to take your mind off the lack of wi-fi. There’s a patchy mobile signal, too, so forget the outside world and get on with lazy lie-ins on the mezzanine kingsize bed, playing albums on the record player, taking long walks through the hills and gently poaching in the copper rolltop bath. If you think all that self-catering is going to get too much, you can arrange in advance for dinner to be delivered one night.
Sleeps 5; three nights, self-catering, from £475 (dinner delivery from £28pp); coolstays.com/cruck-barn

The Beach, Hut Devon
No one will bother you at this secluded eco-hut for two on a private sheltered cove near Plymouth. There’s no wi-fi or electricity, they can’t call, as there’s no signal, and they probably won’t be bothered with the 15-minute hike from the car park down a steep cliff path to get to you. So you’ll be on your own with the sound of the waves crashing on the beach, the Japanese-style hot tub, the woodburner, the solar lights, the barbecue and the cosy mezzanine double bed.
From £325 a night, self-catering; coolstays.com/the-beach-hut