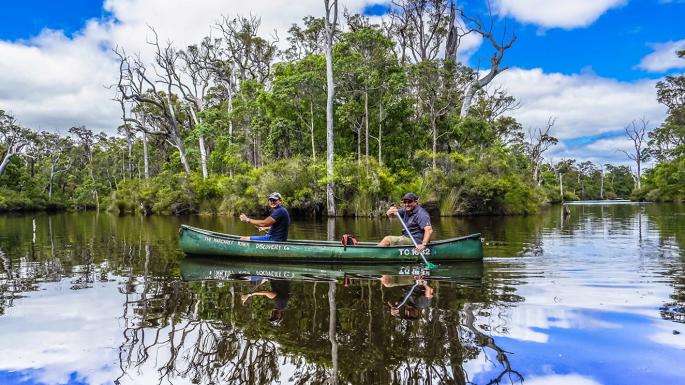 I have flown 10,000 miles to the world’s most isolated big city. I’ve driven hundreds of miles south of that city across scrubland and semi-desert. I’ve parked the car, walked through dunes, stumbled down sandy hills and now, on a lonely pepper-white beach in one of the remotest corners of the planet, I’m chatting to the Cornish seafood TV superstar Rick Stein. And Nigella Lawson. And 50 of the world’s most famous chefs.

The presence of Stein and friends is hardly coincidence; it’s the first gala evening of the Margaret River Gourmet Escape Food Festival, held in the sun-blessed bottom left-hand corner of Western Australia, 200 miles south of Perth. Gourmet Escape is a newish event, but it has, in the brief years of its existence, established a global reputation. The chef Heston Blumenthal called it “the best food festival in the world”, which is pretty emphatic. So what makes Margaret River, and the Gourmet Escape, so remarkable?

Stein (a regular visitor) has an answer. Cradling his glass of local, delicious Limeburners gin, he explains: “Well, it’s a beautiful part of the world, for a start. You’ll see. But also in terms of food — everything! There’s so much choice. Everything you drink and eat comes from around here, from the cheese to the lamb, the venison, the wine, the fruit, even the botanicals in this gin. Nothing is imported, except us. And then there’s the girth.”

“Sorry?” He twinkles, before explaining: “The produce, like the local fish, the hapuku, it just has this girth, this generosity.”

Then, there it is, the endless glitter of the Indian Ocean

He has a point about the choice. Making my way across Castle Bay Beach I can’t decide whether to have the scallop sliders with chilli mayo, Sharp Bay prawns, Albany asparagus, veal from White Rocks or abalone from Augusta. I could head over to that tent for some semillon from Fraser Gallop, Evans and Tate cabernet or Vienna lager from Eagle Bay. Or another gallon of that excellent Limeburners gin, as the barefoot blonde women in floaty summer dresses carry their heeled shoes down to the dusk-lit surf, twirling glasses of Cape Mentelle chardonnay.

The morning after the barbecue dawns bright and blue — and fairly blurry, with accents of dehydration and top notes of killer headache, which means it must be time for a fatbike tour through the karri forests. We jump in a van and head out from our hotel (the Eight Willows Retreat: soothing and agreeable with great access to the whole region). It’s my first proper look at the meadows, vineyards, farmsteads and apple orchards of the Margaret River countryside. And very pretty it is, like an emptier, sunnier Sussex mixed with the Basque country; serene and decidedly verdant. I’m cheering up already.

My mood improves further when we reach the edge of the forests, park in a shaded clearing and I discover that fatbikes make cycling through forests a doddle. We set off down dappled tracks, past the fragrant underbrush, as our guide, Cam, tells us some of the history of the mighty woodlands. “Karri trees grow tall and wide, sometimes as wide as cars,” he says. “The biggest trees will drop boughs and kill a man. Widow-makers we call them. The British harvested these forests and shipped the timber home to build the London Underground. OK, let’s head to the coast . . .”

That last bit sounds promising; it means our jaunt will be mostly downhill. Even better, it’s a ravishing ride. Margaret River’s karri forests might not be as remote as when the British logging camps needed their own currency, but they still have a luminous and stirring tranquillity. After an hour of sweet, dreamy cycling, and the occasional drunken cackle of kookaburras in the eucalypts, I sense a saltiness in the ozoned air and a thinning in the peppermint trees — and then, there it is, the endless glitter of the Indian Ocean.

This magnificent coastline is the second of Margaret River’s natural wonders. The sea heads down from the north, so it is warm. The waters are also unbelievably pretty: turquoise, emerald and jade swirl and mingle, like the doodles of a toddler unable to choose between blue and green. The sea is also great for surfing, with regular 10-15m waves — quite properly gnarly. Head 2km offshore, around Prevelly or Gnarabup, and you can hit 30m “bombie” waves, which have been known to kill. Blumenthal went surfing around Prevelly, got thoroughly dumped and then pronounced it the best day of his life.

If that sounds too daunting you can hike the cliffs and coves. A spectacular 100km trail runs the length of this littoral, from Cape Leeuwin to Cape Naturaliste, taking in a number of alluring beaches, such as Hamelin Bay (great for swimming and snorkelling), Injidup (ace for sunbathers and paddleboarders) and Yallingup (perfect for children, kayaks and caravaners).

On the way you’ll see shingleback lizards and spiralling eagles, climb down limestone groynes to identify maybe 150 orchid species, and you might come across the beach house of a New York billionaire who flies in by helicopter to ogle the dolphins. And when you’ve finished your hiking, swimming, bird-watching, surfing, canoeing and stingray-spotting, grab a table at the alfresco White Elephant Beach Café, sit next to trendy Perthsiders in their denim shorts and pricey sunnies, linger over a long macchiato with your poached pear and bircher muesli breakfast, and watch the humpback whales migrate.

If all that sounds appealing, Margaret River has a third natural splendour up its sleeve: the river itself. Lots of people visit and never see this beauty of a waterway that traces a lazy, meandering course across the peninsula.

Missing the river is a mistake, because a canoe trip with Sean Blocksidge is a highlight of any Margaret River adventure. This is because he is a legend. He knows everything and everyone; he’ll tell you about jarrah stands and jarrah honey, tiger snakes and Baudin cockatoos. He’ll show you secretive cascades, buttercup glades, sacred Aboriginal backwaters, and the place where Jeremy Clarkson, who took a canoe trip, made him laugh so much that “I nearly blew a hole in my undies”.

He will also explain the history of Margaret River settlement, how the first colonisers farmed so disastrously that they couldn’t give away their houses (nowadays a shack near Margaret River will fetch £1 million). Then in the 1960s a cardiologist named Thomas Brendan Cullity realised that much of the soil was stony and hard, with low levels of summer rain — and, therefore, great for wine. Within a few years of him planting the first vines Margaret River was making notable vintages. After that came the entire ecosystem: artisanal cheesemakers, excellent hoteliers, clever new bakers, inspiring restaurateurs. And 50 famous chefs every year.

Which brings us back to the Gourmet Escape. It’s the last day of the festival and we’re checking out the Gourmet Village in the Glyndebourne-like grounds of the Leeuwin Estate winery (summer concerts are held here). The tents, lawns, gardens and pavilions are packed with people sampling, shucking, guzzling, nibbling, laughing, snogging, dancing, falling over, laughing louder and sampling again: over there is Zarephath Wines, over here West Winds Gin, in the next shady marquee Gabriel Chocolate, Sublime Spices, Ashbrook Estate (great restaurant!) and Kinky Kondiments. And much more.

While I wander around, staring up at Lawson and Stein in the Leeuwin platinum lounge (they do endless free rock oysters — yum), I think of what Stein said and I realise that he’s right. Whether you come for a festival or just for fun, this delightful nook of far west Australia has a girth, a fatness, a real sense of God’s plenty. It’s like an English Garden of Eden, in a parallel universe, right down to the very generous measures of gin. Chin chin.

Self-drive tour of wine country
Stop at wineries in Naracoorte and the Barossa Valley on this ten-night tour through southern Australia. Start in Adelaide before heading to Naracoorte and then on to the seaside town of Robe, a popular spot for Australians on holiday. Visit Kangaroo Island — home to koalas, seals and kangaroos — before driving to McLaren Vale, Clare Valley and finally the Barossa Valley.

Sydney and Hunter Valley
Explore vibrant Sydney, staying at the four-star Hotel Jamison, before driving to the Hunter Valley for a tour of its 45-year-old shiraz vineyards, followed by a wine tasting. The Hunter Valley Wine Theatre screens a film that shows a year in the life of a winery.

Wine, trains and quokkas
Combine spotting quokkas — the smiling marsupial often described as the world’s happiest animal — with a trip on the Indian Pacific train and plenty of wine along the way. Starting in Perth with a visit to Rottnest Island, home of the quokka, you move on to the beachside town of Yallingup, with a five-course dinner at the Wills Domain winery restaurant. Then it’s two nights aboard the Indian Pacific in “gold service” class as it trundles to Adelaide. Finish the tour with wine tasting in the Barossa Valley.

Melbourne and Tasmania
Taste some of the best wines from Melbourne’s dress circle, including the light pinots, award-winning chardonnays and rich bordeaux blends of the Yarra Valley. Then head to Tasmania with its sparkling wines, amphora-aged reds and sultry whites.