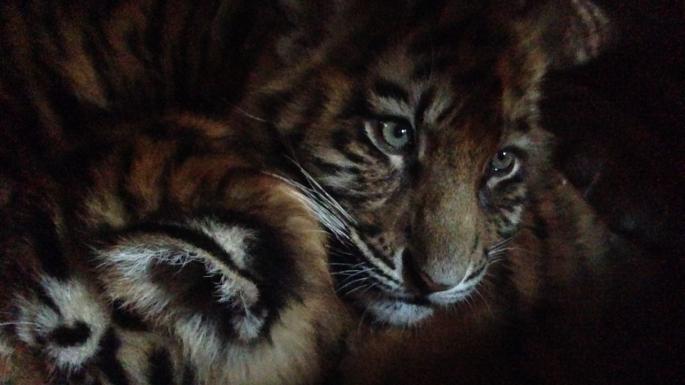 Big cats smuggled through Beirut to feed craze for pets

The crate in the airport customs hall was less than a third of a cubic metre in size, and was simply marked “live animals”.

When customs officers opened it they found three pitiful tigers with hundreds of maggots. Yesterday, the young cats were being handed to an animal charity to care for them until a decision is made about where they will go next.

These are the lucky ones. Other wild animals found at Beirut’s international airport in recent months have had to be put down, victims of a craze that has swept the country in the past year for keeping big cats as pets. “There has always been a low-level trade of this type,” said Jason Mier, the animal welfare campaigner who took charge of the tigers. “But over the last six months to a year we have seen a significant increase in the number of young animals being brought into this country.”

Keeping big cats as pets and status symbols has always been popular in elite circles in the Middle East. Saif al-Islam Gaddafi, son of the Libyan dictator, kept pet tigers, as did the son-in-law of the ousted Tunisian president Zine al-Abidine Ben Ali.

However, the rise in its popularity in Lebanon comes at a time when other countries in the region have begun to take action over the practice. The United Arab Emirates (UAE) banned the keeping of wild animals as pets in January after a spate of complaints of big cats on the loose. In Lebanon, there is no evidence that the animals are being imported for frustrated Emirati residents, though many Gulf Arabs keep holiday homes in the hills outside Beirut.

Although there has yet to be a prosecution, those found to have imported animals are all Lebanese — except in the case of the three tigers, which were in a consignment of animals due to be driven on to Syria. That may sound an unlikely venue in the midst of war, but breeding wild animals for the international market is easier amid the country’s lawlessness and is a rare profitable business. This week’s three tigers were imported from Ukraine, which has a history of wild animals being bred for smuggling.

In Lebanon animals are sold online. Recent advertisements include one for a white lion cub which sold for $16,000, while an ordinary lion can sell for $5,000 for a cub or $10,000 for an adult. Lebanon is a signatory to the Convention on International Trade in Endangered Species, but the maximum fine for animal cruelty is $15.

Mr Mier came to the country to rescue chimpanzees but now runs Animals Lebanon, which works with any wild species. In October, he handled a case of five big cats also smuggled in through the airport — two lions, two tigers, and a leopard. The lions and one of the tigers were already dying. The other tiger and the leopard were taken to a clinic but found to be suffering from a canine virus and also had to be put down. “I know there are pressing issues in this country, but this is something that could and should be dealt with,” Mr Mier said.

Lebanon’s government is divided between mutually suspicious factions. However, even in the autocratic UAE enforcement may be problematic. The country’s most popular wild cat owner, who has posted pictures of himself with his favourite pet white tiger, Elsa, is Sheikh Hamdan bin Mohammed al-Maktoum, Dubai’s Crown Prince.

Wild Nature
About Me