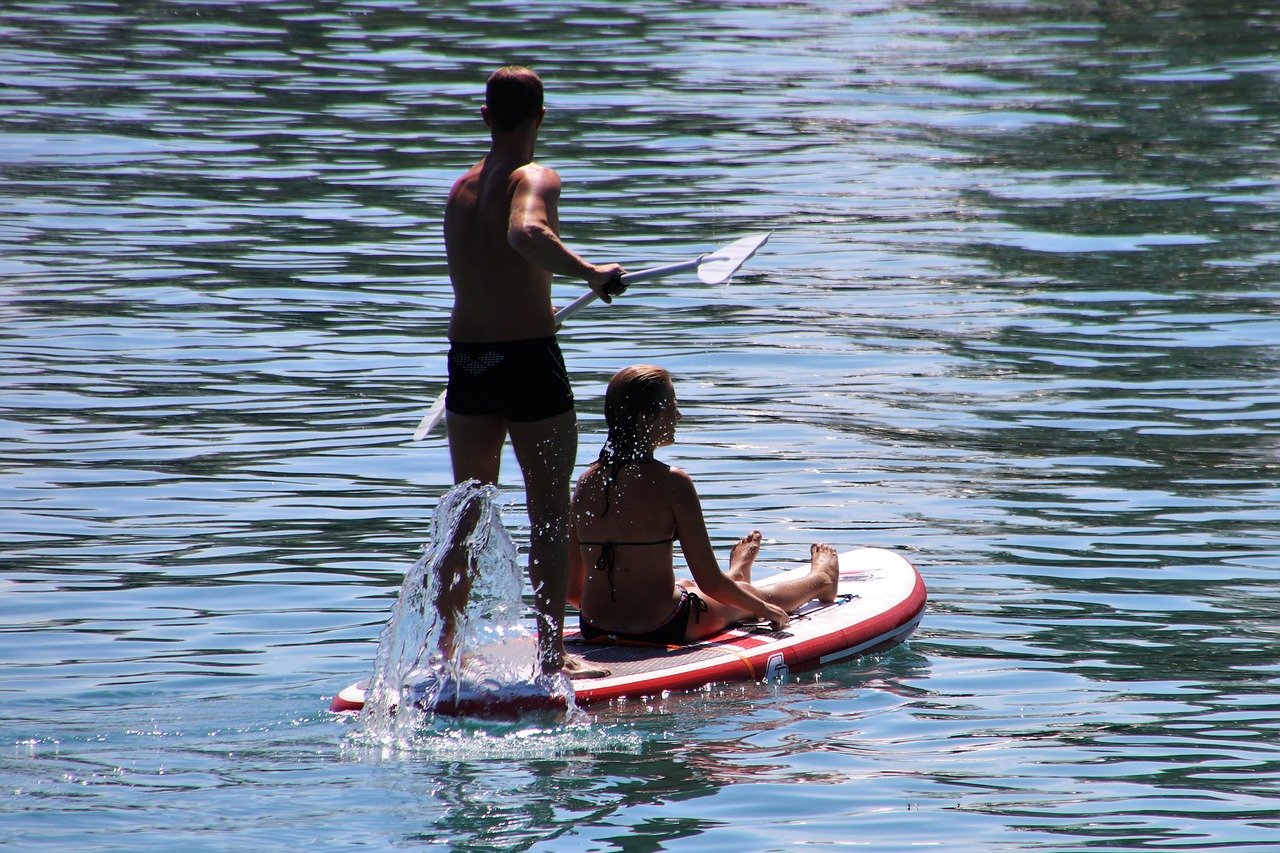 Best Places in California to try Stand up Paddleboarding

It’s the most visited state in the USA and on the bucket list of many travellers. With some of the world’s most iconic cities, including San Francisco and Los Angeles, epic coastal road trips, and nine national parks, you could spend months in California and barely scratch the surface. One thing is for sure, you’ll want to spend some time on its sun-kissed beaches. Rather than just sunbathing or swimming, why not challenge yourself to stand up paddle boarding – the fastest growing board sport in the world.

In this post, we’ll look at the best spots in California for stand-up paddle boarding. Hopefully, you’ll find a beach that will suit what you want from SUPing – whether that’s a regular paddle, surf SUP, or yoga.

The first stop on our list of the best places to SUP in California is not a beach, but a lake. On the border of Nevada and California, you’ll find the absolutely stunning Lake Tahoe. The crystal clear and calm waters are perfect for beginners, and there’s the added bonus that you’ll be SUPing to the backdrop of stunning scenery. Lake Tahoe is not only great for stand-up paddle boarding, but there are many opportunities for hiking, biking, and kayaking.

While you can enjoy cycling or walking across the Golden Gate Bridge, you’ll be able to truly appreciate how impressive this superstructure is from your paddle board! It’s not just the bridge you’ll marvel at, but the mountains and SF skyline too. Launch from Horseshoe Bay between July and October when the waters are at the calmest. Always be aware of the currents around the bridge itself, and also what’s around you. It can get pretty busy and sometimes dangerous!

This gorgeous island off the southern coast of California is one of the best places for paddle boarding in the United States. With numerous coves, you can dip in and out and you’ll have the chance to see marine life – including seals and seabirds. The western coast of the island looks out onto the Pacific and is best for SUP surfing. Remember that if you’re surfing, you’ll need a different type of paddle board, so be sure to check out paddle board sizing.

When you’re not SUPing, there are great places to eat and the island has a fascinating history.

La Jolla Cove is often cited as the best spot for SUP in California. Located in Northern San Diego, it has super clear water and you can see far down as 30 feet. This will enable you to see not only fish, but stingrays and leopard sharks. Out of the water, you should keep your eyes peeled for seals and sea lions. La Jolla is also a wonderful place to snorkel, kayak, and scuba.

If you’re looking to see marine life while you paddle board, then Laguna Beach State Marine Reserve should be on your California itinerary. Here, you’re likely to see dolphins, sea birds, a couple of different species of seal, and if you’re really fortunate – blue and grey whales. It can be nerve wracking to pass such a large animal on a paddle board, but they truly are gentle giants.

The waters here are pretty calm, while the beaches here are a lovely spot to take a break and have a picnic.

If you’re in LA, there are some awesome beaches but one of the very best is Venice Beach. But did you know it’s named for the canals that wind through the district? Though this is a residential area, you’re able to take a board and go for a paddle there. The waters are calm and it’s easy for beginner and intermediate SUPers. Just be sure to duck if you’re going under a bridge!

Next stop is about as north as you can go in California. The Klamath River sits on the border with Oregon, and it’s the only river on our list. Trade beautiful beaches for lush forests, massive lakes, and wildlife refuges. You could even head over the river into Oregon! The Klamath Basin and the Southern Cascades are not as well-known as other spots on this list, but they’re a wonderful place to SUP.

There are some wonderful SUP spots in Monterey, including the wharf, Santa Cruz, Camel Beach, and Big Sur. The only issue is that it can get very crowded in summer. However, if you go in April, May, or September, you might even get the place all to yourself. Monterey has some of the most beautiful camping grounds in California and it’s well worth taking an inflatable SUP so you can explore some of those too.

If you’re a solo paddler and want to meet up with other SUPers, then Redondo Beach is the place for you. One of the most social SUP spots in California, it has a thriving community. And it’s not just people are welcome, lots of paddlers bring their dogs along too! There are spots along the beach that are suitable from all levels – from beginner to expert.

Last but not least is Coronado Island. While it has something from all levels, it’s especially good if you’re a beginner. Located off the coast of San Diego, the calm waters mean you can even give SUP yoga a go! Coronado is a popular tourist spot due to the second largest wooden structure in the US, the Hotel del Coronado, and the island’s chilled out beaches.