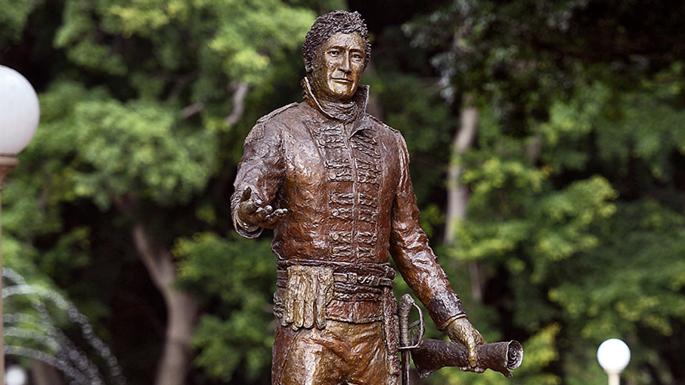 At the largest outdoor market in central Melbourne is a monument to the rapacious son of an English convict, striking less for its bluestone plinth than for the amendments to its original inscription.

The series of extra plaques attached by the city fathers to John Batman’s 136-year–old memorial testify to Australia’s awkward efforts to reconcile the feats of its British pioneers and their treatment of the Aboriginal occupants.

History wars have intensified in Australia after the deadly clash three weeks ago between white supremacists and protesters in Charlottesville, Virginia, which hastened action across the US to remove Confederate statues.

Renewed demands from Aboriginal activists, academics and others rapidly followed, calling for the modification, or removal, of many of Australia’s most prominent monuments to early explorers and settlers. They were mostly British and include Captain James Cook, who is credited with discovering Australia.

Opponents argue that the monuments do not recognise Aborigines as Australia’s first occupants and that they honour white men guilty of atrocities against them.

The movement has won unexpected and powerful backing from Australia’s Labor opposition leader, Bill Shorten, who this week supported amending the inscription on the 138-year-old statue of Captain Cook in Hyde Park, Sydney, to deny him the credit for discovering Australia, an achievement that activists argue belongs to Aborigines.

“Our history didn’t start when Captain Cook sailed into sight of Australia in 1770,” Mr Shorten said.

Malcolm Turnbull, the prime minister, sharply disagreed, comparing the altering and tearing down of statues and monuments to the actions of Stalin. “When he fell out with his henchmen he didn’t just execute them, they were removed from all official photographs — they became non-persons, banished from memory and history itself,” Mr Turnbull said.

The Melbourne memorial to Batman, a landowner credited with founding Australia’s second largest city, is an example of what oddities may follow when a discomforting past tries to accommodate an assertive present.

Melbourne’s city fathers buckled two decades ago when they could no longer claim its location was “unoccupied” upon its founding, as the Batman memorial’s originial inscription asserted. They installed a second plaque that said: “It is now clear that Melbourne’s site was inhabited long before by Aboriginal people.”

But pressure continued and a third plaque was installed in 2004, at the behest of city council’s Aboriginal advisers. They considered the wording of the first correction too weak: the new plaque apologised to Aborigines for the “wrong beliefs of the past and the personal upset caused”.

Batman, before his death, freely admitted murdering wounded and fleeing Aborigines who trespassed on lands he owned in Tasmania. It is an uncomfortable legacy that he shares with other British explorers and administrators whose memorials are also the subject of calls for them to be modified or taken down.

Those in the line of fire include the British army officer Lachlan Macquarie, who, as governor of New South Wales, is known to have massacred Aborigines on Sydney’s fringes and had their corpses hung from trees to instil “the utmost terror”.

His statue in the same park as Cook’s in Sydney was dedicated less than four years ago by the city’s left-wing lord mayor, Clover Moore, who has now referred the question of whether it should remain to her Aboriginal advisers.